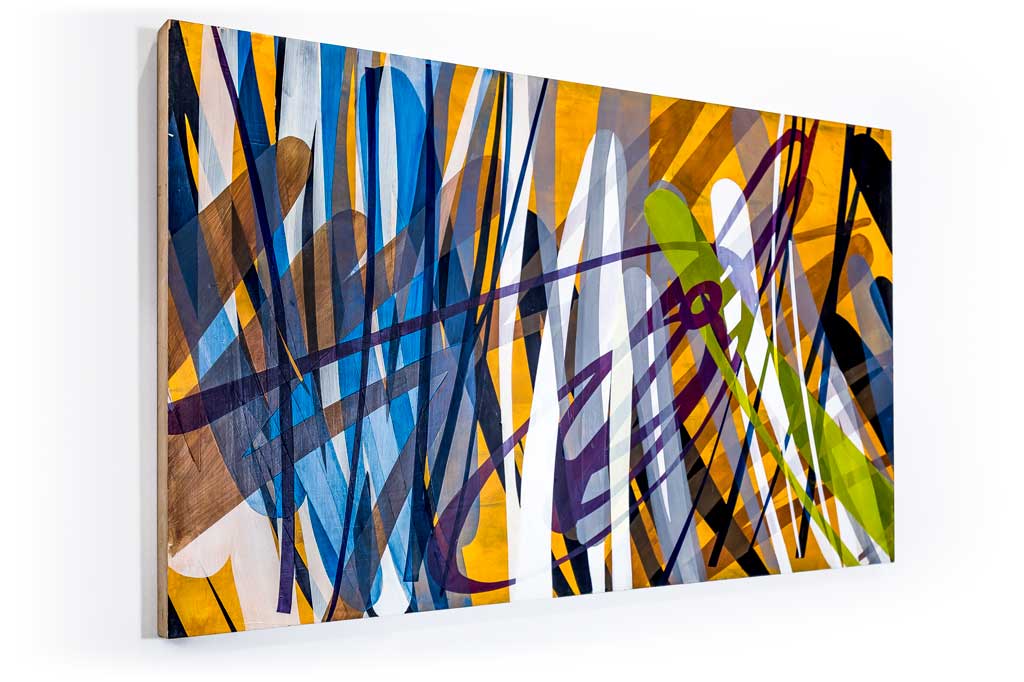 stratum [strat-uh m] n. plural strata
1. a layer of material, naturally or artificially formed, often one of a number of parallel layers one upon another

substratum [suhb-strat-uh m] n. plural substrata
1 .something that is spread or laid under something else; a stratum or layer lying under another.
2. something that underlies or serves as a basis or foundation.

This Friday Scott Eakin will be exhibiting his newest paintings at Modern Now Gallery, in a show titled Stratum | Substratum. The title is a reference to not only the method of his art making but also to the psychological process. A stratum is defined as a series of parallel layers, both artificial or natural, and a substratum similarly, in that layers spread out under one another (here the dichotomy is based in less concern for the parallel and more on the amorphic spread of organic deductive and additive processes). At first observation it is clear why this title was chosen, Scott has worked hard not only at the composition of his art making but also at acquiring a deep knowledge of the technical aspects of paint while developing advanced methods of layering and glazing.

My work is driven by process and constant observation of the objects and natural world around me. – Scott Eakin 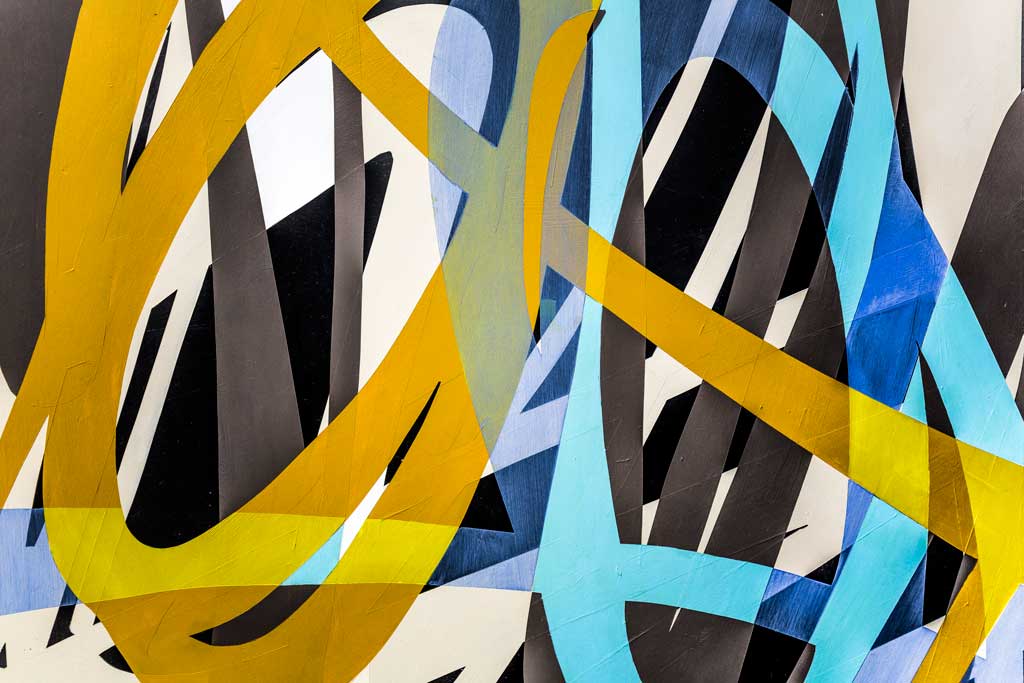 However it is in the second definition of Substratum that we can interpret a less apparent understanding of his paintings. Here Substratum is defined as “something that underlies or serves as a basis or foundation.” Sure this is also a literal interpretation but it is also an entry for further investigation. Like strata and substrata Eakin’s compositions form, much like nature, a series of organic layers that build over time. It is in this mode of abstraction that we are captured in Eakin’s paintings deeper meaning, “in the basis and foundation”. The present, the past, things forgotten, all become new as beginnings fade into what will always be, regardless of time. Particularly in Scott’s work, structures emerge that elude to a foundation of marks, that are at times obscured yet remind us, that if you scratch, dig or plunge deeper, that there is always more to see and interpret. In this way he allows the viewer to stay on the surface of color and shape that delight with their delicate dance, only to move us through their symphony of sinuous movement to the carved out negative space of what is often not seen. At times its darkness, at others its the patterns of nature or just seemingly unpatterned noise, yet it is always through the artist’s hands that these meanings are constructed.

I am attempting to take that effort of active looking, seeing with intention and channel it to create something beautiful and dynamic that will feed a hungry eye. – Scott Eakin 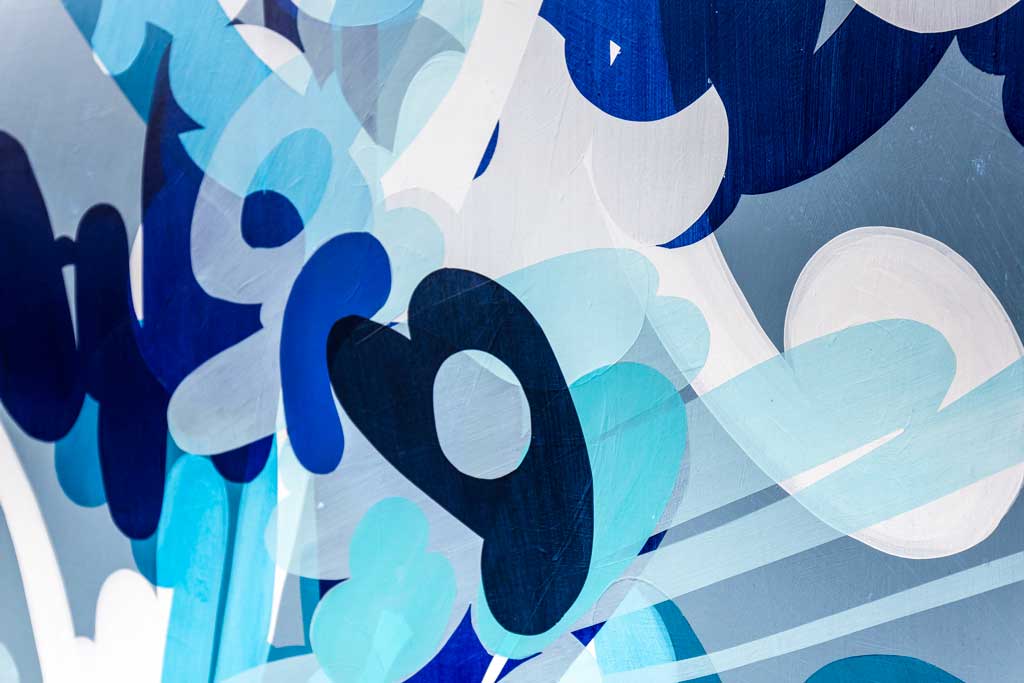 In the end Scott Eakin’s compositions are playful forms that derive as much from his deep understanding of composition as they do from his even deeper knowledge of painting. He has developed an eye for the art of form, composition and material to create artworks that are simultaneously delicate and grounded. These whimsical forms are strengthened by Scott’s strong sense of color, that not only invites the viewer in, but somehow yearns to be touched and understood.

Yet tangled into his paintings are sets of opposites, that is the digital and analog, movement and stasis, the macro and micro of distance and proximity. And as in nature again we see that build up over time in his paintings, one that is both slow and omnipresent. That up close reveals one set of information and yet another from afar. This is one of the more beautiful effects of Eakin’s work, that in close observation the process and even at times the strain and adhesion of layers and build up are obvious and tactile and from afar they create composition of movement and large gestures.

The actual painting is a synthesis of digital and analog components.  I try to make the paintings work both as a micro or macro environment.  You can’t really tell if you are seeing something close up or at a great distance.  While much of todays world is analog to digital, these paintings are digital to analog. – Scott Eakin

Stratum | Substratum will be on display through October 5th at Modern Now Gallery and admission is free. Please check out hours here. For inquiries, private viewings or previews please write us at the gallery. 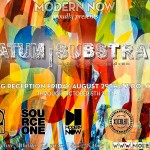 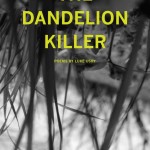